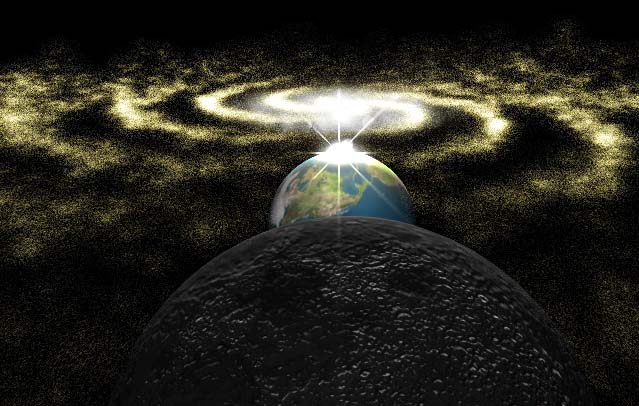 Galactic Alignment with the Full Moon on the Solstice

The Full Moon on the Winter Solstice on December 22, 1999 is like the sweep second hand aligning with the minute and hour hands at midnight of a twenty six thousand year cycle. If there is one moment which represents the exact fold point of the transition in our time this is it.

Here's how it works:

Because the Earth's axis is tipped with respect to the plane of its orbit around the Sun, there are four seasons. These are defined by the four nodal points in our orbit. On two of these nodal points, the summer and winter solstices, the Earth's axis is tipped exactly toward the Sun and away from the Sun, while on the equinoxes it is exactly half way between. Thus the solstice and equinox points imply a four fold, or square, symmetry pattern in the Earth's circular (or really elliptical) orbit around the Sun. The solstice and equinox points also determine the position of the divisions between signs in the Tropical Zodiac which is pegged to the seasons.

The Earth spinning on its axis is like a little top that wobbles backwards very slowly as it spins. Thus, the orientation of the seasons with respect to the larger context of the background stars is shifting very slowly. This gives rise to a phenomenon known as the precession of the equinoxes wherein the Tropical, or seasonal, signs are shifting very slowly backward with respect to the background "fixed" stars, or Sidereal signs, for which they were named some two thousand years ago. But from a 20th century astronomical perspective the fixed stars are really the stars of our local Milky Way Galaxy - the larger context in which our solar system is embedded.

Thus, our solar system can be seen as a little square, or cross, with four fold symmetry created by the geometry of the Earth-Sun system spinning very slowly, completing one full revolution every 26,000 years or so. Since it is a four fold system we can really talk about the quarter cycle as the most meaningful measure, so once every 6,500 years or so the local solar system will complete one quarter cycle and the solstice or equinox axis will align with What?

The larger context in which the solar system is moving is the Milky Way Galaxy, and since this is a relatively flat spiral galaxy, its most obvious orienting feature is its equatorial plane, which also contains its center. So it is possible to talk about the direction to the center of the local Milky Way Galaxy from our local solar system. Viewed from Earth, we see the Milky Way as a band of light which is roughly vertical, and therefore perpendicular to the ecliptic, the apparent path of the Sun across the sky, which is really the plane in which the Earth orbits the Sun. Thus, we can see that the equatorial plane, or center line, of the Milky Way intersects the ecliptic. The effect of precession from our perspective is that the solstice point, the point where the Sun is on the ecliptic with respect to that background stars on the solstice, is moving backwards very slowly. So at some point the solstice point will exactly coincide with the equatorial plane of the Milky Way Galaxy.

info about this New Moon from email